Need someone to sweep a sidewalk…fix a leaky sink…wrangle with the bureaucracy…put together the deal, finance and build out a restaurant?

After opening up restaurants internationally—including Sao Paolo, Brazil where she caught the wine bug—Amanda returned to her native Detroit and began taking a scholastic approach to wine. In early 2000, with her husband Paul, Amanda moved to Traverse City with a five-year plan to open a restaurant. During that time, she officially began her pursuit of the Master Sommelier Diploma.

In July of 2004, the couple opened Trattoria Stella at the southern most end of Building 50 at the old state hospital grounds in Traverse City, which was followed by the birth of their first daughter that winter. Amanda passed the Advanced Sommelier exam in 2007 and took her first crack at the Master in 2012 with their second daughter—then an infant—in tow.

In July of 2014, Amanda and Paul (along with now partner and Executive Chef Myles Anton) celebrated ten years at Trattoria Stella by opening their second restaurant in the heart of downtown Traverse City: The Franklin.

All things served in a glass, bottle or other vessel out of which it may be optimally enjoyed—whether at Trattoria Stella or The Franklin—are curated by Amanda, though her actual floor time is spent at Trattoria Stella working with young sommeliers and servers to keep the “service” in hospitality.

Also in 2014, Amanda launched the City of Riesling symposium with co-director Sean O’Keefe of Chateau Grand Traverse, which brings Riesling makers from all over the world for a weekend of arts and education to Traverse City. 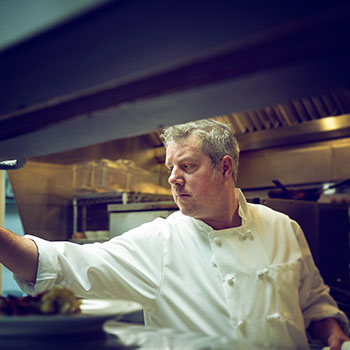 In 1987, at age 16, Myles Anton began washing dishes at Mama Loccrichio’s, a classic family Italian restaurant located near his childhood home in Detroit, Michigan. After a few months, he moved from the cleaning side of the kitchen to the culinary side. While in culinary school he worked his way up to Sous Chef at the Townsend Hotel in Birmingham, Michigan under Chef Louai Sharkas. That experience led to multiple sous chef gigs at various restaurants in the Detroit area. In 1999 Anton opened D’Amato’s in Ann Arbor, a 170 seat Italian restaurant as the Executive Chef. In 2002, he headed east to open Bunker’s Wharf restaurant in Downeast Maine near Acadia National Lakeshore. The restaurant was located in a working lobster fishing harbor.

In 2004 Anton moved back to northern Michigan to open Trattoria Stella. At Stella he has been able to expand his vision of what food can be. He runs a locally based menu that changes daily. Local farmers show up at his door all summer with their goods. This kind of menu requires a lot of thinking on the fly. It is one of his greatest assets as a chef. The Farm to Table approach of purchasing is top priority in his kitchen. Anton works with more than 45 individual farms in this region. His food is aggressive, bold, bright, and fresh. Anton keeps his dishes simple, and let the quality of the products do the talking – the Italian way.

Anton has received regional and national attention. Twice he was a recipient of a “Forty Under Forty” award which recognizes the most influential people in the Traverse City region. He has been a James Beard nominee for “Best Chef – Great Lakes Region” six times. In addition, he has been highlighted in multiple local and national publications including Detroit News, Detroit Free Press, Chicago Tribune, New York Times, Rachel Ray, Cooking Light, Hour Detroit Magazine, and Livability.com.

At home, Anton spends time swimming and biking with his two daughters, Annika and Maggie, and playing a lot of ball with his dog Benny.